Have you laid eyes on Gmail’s new look? [2018] If you haven’t, you probably want to stop everything you’re doing right now and take a peek.

The new interface is fresh and cool, not to mention very helpful for staying productive. With the new interface you get to view your Google calendar, and there are even smart responses that show up at the bottom of each email so that you can respond in a flash without typing a single thing!

After upgrading to the new look there were so many cool features and I was totally smitten once I upgraded. BUT THEN… I couldn’t find the contacts.

Where are my Google Contacts?

Now that you’ve upgraded, the first question you’ll ask yourself is, “Where in the world did everything go?”

You might be struggling a little bit like I did at first, trying to figure out where things are. For starters, the buttons are totally different so that makes using Gmail a little different from the ways you’ve used it over the last 10+ years.

Here’s a great example: one of the features I used on the old Gmail interface were Google contacts. When I initially upgraded my Gmail interface, I was excited because everything looked so fresh, but I was immediately frustrated when I couldn’t figure out where my beloved Google contacts were.

If you’re a Google contacts user who’s recently upgraded to the new Gmail look, chances are that you got a bit frustrated just like I did. So today, I’m going to show you how to find your Google contacts inside your new Gmail interface. It’s actually quite simple.

With the old Gmail interface you had a drop-down list right under the Google logo and you could get to your contacts with no issue.

You could easily switch between mail, tasks, and contacts in a flash. 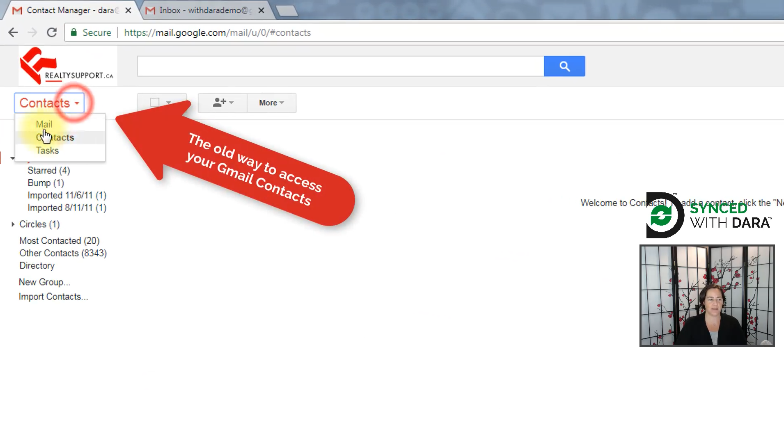 In the new Gmail interface, you’ll find your Google contacts somewhere a little different. In the upper right, if you click on the small grid of nine squares in the top right corner of the Gmail window, it shows you the different apps that you have available. You’ve traditionally found your calendar, Google Drive, or Google Docs here. That is now where to look for your Google Contacts. 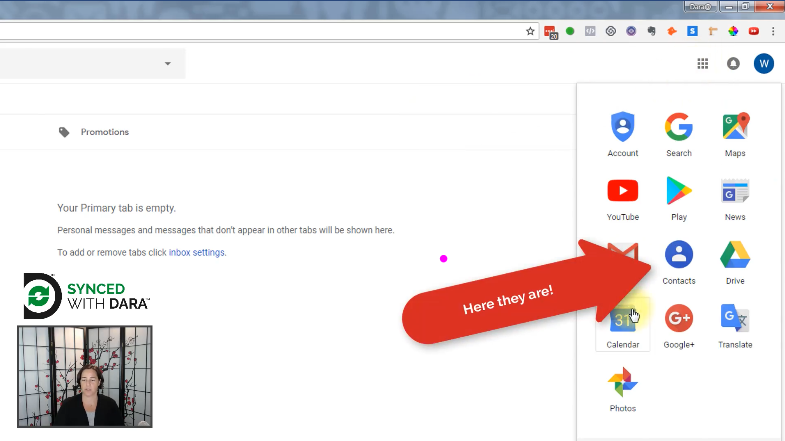 Once you’ve clicked on the square grid, just click on Contacts and you’re there. Google contacts now open in a new tab.

This is where you can add and edit contacts or import contacts from other programs, just like you used to. If you have maintenance to do with your contacts, this is where to go.

If you’ve got an easy button on your desk, go ahead and give it a push because you’ve found your Google contacts again! Did you like this tip? Like my page on Facebook or subscribe to my YouTube channel so that you can see more handy video tech tips just like this every week. 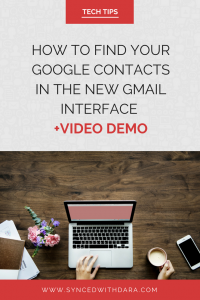 Have I mentioned I loved maximizing efficiencies? My (healthy) obsession helped me simplify and scale my business, and I know they’ll do the same for you too. Remember; I’m also a Google Tools ninja and certified Funnel Gorgeous Master Marketer. So if you’ve been looking for a queen of ALL things tech and marketing, you’ve found your gal.

Great! On its way - please check your email!

Something went wrong. Please check your entries and try again.