You’d never know it from the pics I post on social, but I used to be a workaholic couch potato.

I worked (a lot) and came home and watched TV. My exercise came from running for the bus, not chasing a frisbee, squash ball, climbing a mountain, skiing down a slope, or biking – anywhere.

But I was looking for a (big life) change and so I moved across the country.

From Montreal to Vancouver. Sight unseen.

I had gotten a new job that made the “sight unseen” part possible and less scary, but I had not been to Vancouver since I was 15. I knew no one. I just had a job, and a place to stay for my first 5 weeks.

Through some small-world wizardry, I met a woman who was looking for a roommate, and I took a leap and signed a lease with her. The new apartment was adorable, 5 minutes from the beach, in a beautiful character home, in a quaint neighbourhood. 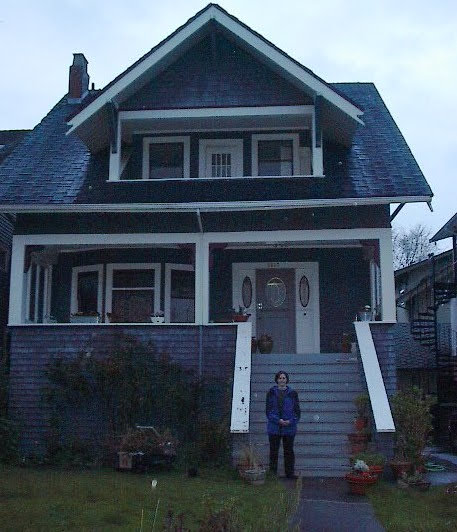 But remember when I said I moved to Vancouver sight-unseen? Well, my job was 16 kms (~10 miles) from my new home. Not that far. But… city driving, not highway miles. And little did I realise that the Vancouver transit system was not NEARLY equivalent to the Montreal Metro and bus system.

AND THEN… a bus strike kicked in on the day my new lease started.

Sooooo I went car shopping. NBD, right? Wrong. Some glitch on my credit report led to me getting denied the car loan, and it was a few weeks before it was fixed.

What’s a girl to do?

So, like any person who knows NOTHING about bikes, I went to COSTCO and bought a bike.

For anyone who still knows nothing about bikes: you do NOT want to be commuting 30+ kms (20+ miles) a day on a piece of sh!t $99-when-new bicycle.

I was probably the laughingstock of the bike shop when I asked them to outfit my Costco clunker with a pannier rack. But hey, I didn’t know better.

And I started riding my newly pannier-installed clunker-bike to work. Painstakingly slowly – taking me over an hour each way.

But I was ALSO incredibly proud of myself. And I loved seeing the city in slow motion. On my rides, I would ride by condos I dreamed of owning, views I dreamed of waking up to, and my mind weaved and wandered on my morning and evening commutes.

Yes, there was rain. It’s Vancouver. But I only remember the good times. Ever the glass-is-half-full-type, I am.

And speaking of good times – how did that tie into my romantic life?

You’re probably wondering how I landed the “love of my life” because of my cycling prowess.

Eventually I upgraded that Costco bike to something slightly more commuter-appropriate.

Eventually I got a little bit faster/more fit/more efficient on that commute.

But I was now a cyclist! I had cycling gear. I was fitter than I’d ever been. I was NOT a couch potato. (Though the workaholism was a whole other beast.) I played Ultimate Frisbee!

And one day, the “kid” in the warehouse (he was 20, to my 25) moved to my neighbourhood, and our cycle commutes became similar.

Don’t get me wrong – he was NOT interested in having (my slow-ass as) company on his morning (or evening) commute. But occaaaaaasionally, we would commiserate about the weather as we entered the building, dripping from the downpour-du-jour. Or we’d leave work at the same time, and ride for a few minutes together before he zipped off in all his youthful speed.

And one conversation led to a friendship, and then a crush, and then… the rest is history and we’ve now been adventuring together for 19 years.

If there hadn’t been a bus strike.

If I had gotten that car loan.

I wouldn’t have bought a bike.

I wouldn’t have become the active person that I can’t imagine myself not being.

I wouldn’t have had a cycle commute with my funny coworker.

So yeah. A bus strike, a refused car loan, and a bicycle led me to the love of my life.

Oh, and today’s our 18th wedding anniversary. Happy anni to us! 🥂

Have I mentioned I loved maximizing efficiencies? My (healthy) obsession helped me simplify and scale my business, and I know they’ll do the same for you too. Remember; I’m also a Google Tools ninja and certified Funnel Gorgeous Master Marketer. So if you’ve been looking for a queen of ALL things tech and marketing, you’ve found your gal.

Great! On its way - please check your email!

Something went wrong. Please check your entries and try again.